​Myboycolly scores another victory at Cessnock 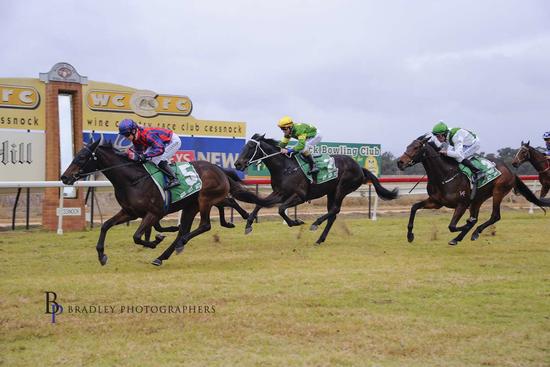 3yo Myboycharlie gelding Myboycolly, scored his second career victory and second victory this preparation with a last to first win at Cessnock on Tuesday 30/7/19.

After a comprehensive victory first up over 1450m at Muswellbrook, he went to Taree second up running 7th after drawing a wide barrier, before getting the chocolates at Cessnock in the BM58 1570m event.

Wearing ear muffs for the first time, he settled well during the run at the tail of the field, before jockey Samantha Clenton, got off the fence on the turn and he powered home to beat the short priced favourite Sir Winkle by 0.68L. It was a day of leaders winning, apart from Myboycolly, which adds even more merit to his victory, and he finished off the last 600m in 34.92 seconds.

Owned by a large group of owners put together by JK Racing Syndications, Myboycolly took advantage of his last chance to secure a BOBS bonus with his win on the second last day of the racing season. It was his second win from 7 career starts and trainer Jason Deamer has done a great job with the horse, after his first prep running 9th, 7th, 3rd and 9th to a massive turn around improving him to 1st, 7th, 1st!

The gelding was bought by JK Racing’s James Lovegrove from the draft of Vinery Stud at the 2017 Magic Millions National Sale and he is from the Testa Rossa mare COLLODI, herself a winner of the Moet & Chandon over 1700m on Melbourne Oaks Day 2006.

A big congratulations to all of MYBOYCOLLY’s connections and looking forward to seeing him continue to progress this prep.