Myboycolly impresses first up at Muswellbrook 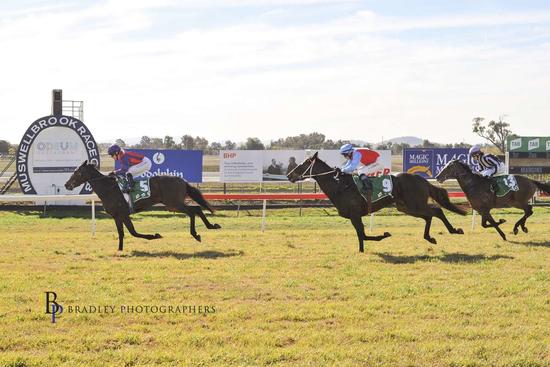 3yo gelding Myboycolly was too good for his opposition in the @THEBROOKRACING ON TWITTER MAIDEN HANDICAP over 1450 METRES at Muswellbrook on Monday 1st July.In what was an excellent training performance from trainer Jason Deamer, the son of stallion Myboycharlie was fit and ready to go first up, without the benefit of barrier trial and he won running away by 1.47L to second placed Fashion Icon (Kris Lees) and 2.92L back to third placed Polish Train (Pat Farrell.)After having a few issues with pulling and over racing in his first prep (4:0-0-1), some gear adjustments made a massive difference to his performance.

Myboycolly was the subject of some late money being backed from $7 into a $3.50 favourite by the time they jumped. Ridden by jockey Samantha Clenton, Myboycolly jumped well and sat 5th on the rails before Samantha started her run from the 400m mark, peeling wide and going away from the rest pf the field to win with some in hand.

Purchased by JK Racing’s James Lovegrove from the 2017 Magic Millions National Yearling Sale, from the draft of Vinery Stud for $6350, the horse recouped some his owners outlay, collecting the prize money and BOBS bonus for a collect of $16825.From the Testa Rossa mare Collodi, a city winner herself and she has had 5 foals to race for 4 winners and a placing, including Eroico (Hong Kong), My Favourite Brown (South Africa) and Myboycolly’s full brother Charlie Royale, who is a veteran of 76 starts for 7 wins and 28 placings and almost $300k in prizemoney.

For a horse that will get over further ground, it was an excellent first up effort to win over 1450m, and he will take natural improvement from the run and confidence from the win and hopefully for his connections it is the start of a fruitful preparation.

Congratulations to all of his owners: