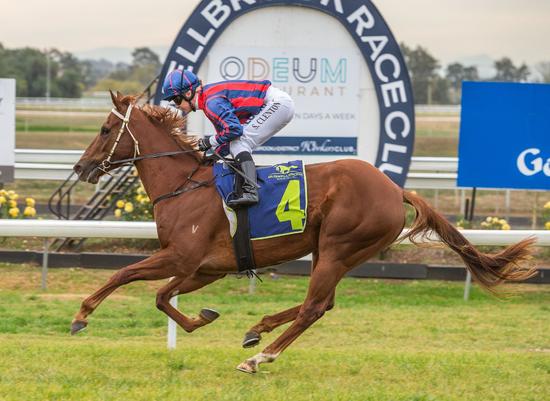 The filly, trained by Jason Deamer, has been slow to mature, coupled with a couple of niggling issues, and a test of her owner’s patience, but all of that was forgotten when she stormed home to win by 1.53L. Tuned up with one quiet educational trial at Wyong, trainer Jason Deamer pulled off a great training performance to have her ready to win first up.

Ridden by jockey Samantha Clenton, who has had plenty to do with the filly, having broken her in and she has been involved in the fillies pre training with her partner Tim McIntosh, Star Alibi was a bit slowly away from the gates and was last on jumping, but Sam got her comfortable in running and worked her way through the field before going wide to the outside on the turn to storm past them, ears pricked and eased up on the line to record an impressive win.

The filly was purchased by JK Racing’s James Lovegrove at the 2017 Scone Inglis sale from the draft of Vinery Stud. She is from the unraced Redoute’s Choice mare Laynlow, who is a daughter of the Champion 2yo filly of her time Victory Vein, and Star Alibi is a half sister to impressive Brisbane performer Sofie’s Gold Class (by Hard Spun) who has won 4 of her first 10 starts.

Congratulations to all of Star Alibi’s owners, trainer Jason Deamer and jockey Samantha Clenton and looking forward to her next run!